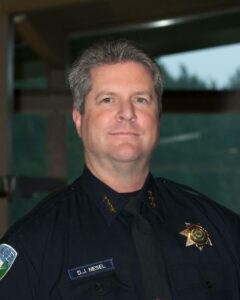 The Chief will share the department’s many accomplishments as well as some of the challenges officers encounter every day.

DJ Nesel joined the King County Sheriff’s Office as a Reserve Deputy in 1989, just shortly after his honorable discharge from the United States Marine Corps, where he served as a Military Police Investigator.  In 1

DJ has a Bachelor of Arts degree in Business Administration with a concentration in Finance (1991) from the University of Washington.  He is a graduate of the Police Executive Research Forum’s (PERF) Senior Management Institute for Police (SMIP), as well as from the West Point Leadership Program.  DJ has taught criminal justice classes during his career at a local Washington State college and a private university.

Chief Nesel is pleased to be part of the City team, and looks forward to serving the citizens of Maple Valley.