Anniversary of the Rotary Club of Maple Valley Chartered in 1985

An event every year that begins at 6:00 am on day 8 of June, repeating indefinitely 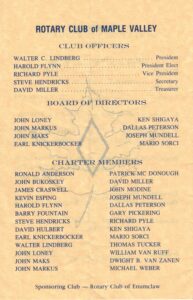 (from the book ‘Maple Valley Rotary – The First 25 Years’)

Around 1983, two men residing in Maple Valley who were members of Rotary International, decided they would like to have a local branch. One was Walter Lindberg, a Government Service agent, and the other Steve Hendricks of True Value Hardware.

Lindberg was an active member of the Auburn Rotary Club and served as its past president before moving to Maple Valley. Hendrix had been attending meetings in Chehalis before residing in Maple Valley.

A handful of men began holding meetings at the Lake Wilderness Lodge and struggled to encourage the necessary 26 members to join so they could become an official Rotary Club.

According to three of the remaining charter members, it was tough going; but finally, in 1985, the Club had enough members and received its Charter at a ceremony at the University of Washington Conference Center, (Lake Wilderness Lodge) on Saturday, June 8, 1985.

The Charter was presented by Robert W. Graham, District 5030 Governor from 1984-85. Rotary International President from 1984-85 was Carlos Canseco.

The program featured an Invocation by David Hulbert; the Flag Salute and “America” sung by Steve Hendricks; Introduction of Guests and Dignitaries by Walter C. Lindberg; Presentation of Charter by Robert W. Graham; Presentation of President’s Pin by William Secord, of the Sponsoring Club, Special Representative of the Enumclaw Rotary.

Walter C. Lindberg then led the Introduction and Presentation of Charter Pins to Members.