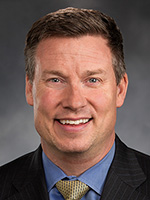 From the Senator’s Home Page:

First elected to the Senate in 2012, Mark chairs the Senate Financial Institutions, Economic Development & Trade Committee and the Joint Legislative Audit & Review Committee. He is also a member of the Senate Early Learning & K-12 Education Committee and the Senate Ways & Means Committee, where he is part of the team that negotiates the state’s capital construction budget.

All in-person club meetings (AM and PM) are suspended until further notice. Virtual meetings via ZOOM will be announced via email to Club members.